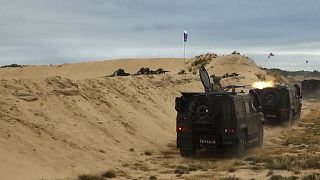 A joint Russian-Belarusian military drill took place five kilometres away from the Belarus-Poland border on Friday.

More than 800 soldiers from Russia and Belarus and about 170 units of military equipment took part.

It comes as Belarus President Alexander Lukashenko is facing regular protests calling on him to resign.

They were sparked by Lukashenko being announced as the winner of an August 9 presidential election.

His critics say the election was rigged in his favour.