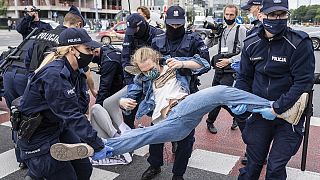 They blocked Swietokrzyska street near the Palace of Culture and Science.

Demonstrators chanted "We are here for your children" and "We want to live".

The protesters want to draw attention to the climate crisis and force the Polish government to act.

Activists also demanded the government to reduce greenhouse gas emissions to net-zero by 2030 or before.

After the call to disperse, the policemen started to take the demonstrators out of the road.

"Bold actions like occupying roads, blockading bridges and creatively disrupting the work of banks which finance the climate crisis can capture government and media attention and change the conversation in ways conventional resistance hasn't," wrote Extinction Rebellion on its webpage.