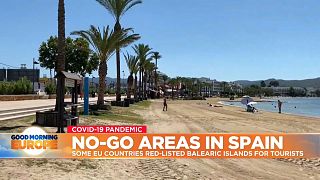 Red-listing of Ibiza and Mallorca a disaster for local businesses

Local businesses throughout much of Spain have been left devastated by the coronavirus pandemic, as neighbouring countries impose travel warnings to potential tourists due to the number of cases in the country.

Particularly hard hit are the Balearic Islands, which include Mallorca and Ibiza, usually the site of annual summer pilgrimages for millions of party-goers and sunseekers - now ghost towns in comparison.

Euronews paid a visit to Ibiza, home to world-famous super clubs, beaches, and restaurant-lined streets that usually attract millions of visitors each year.

The COVID-19 pandemic has however left this place unrecognisable, with nearly empty beaches, and only the odd tourist wondering the streets, determined to have their holiday in the sun no matter what.

“We’re getting up earlier, doing more activities, we’ve seen a lot more of the island this year than we did last year,” one British couple told Euronews.

Upon their return to the UK, they will be required to quarantine for two weeks, with Spain on the list of countries deemed high risk by the British government.

And it’s not just Britons that are largely steering clear of holidays to Spain due to these measures. Germany - another crucial source of tourists for these islands - put almost all of Spain on its red list of high risk countries. Mallorca is sometimes nicknamed the 17th German regional state, due to the number of people who travel there for holidays each year.

Austria also strongly advised its residents not to travel to the Balearic Islands from August 24, even asking holidaymakers to leave the archipelago.

Christina Gonzalez, who runs a jetski and boat hire business on the San Antonio waterfront in Ibiza, says daily bookings are down at least 40% on last year.

She says this year has been “pretty crazy”, with almost empty streets which are normally thronged with tourists.

Spain imposed one of the world’s strictest lockdowns at the height of the pandemic in March, and since lifting the more draconian restrictions, it has reintroduced measures such as the wearing of masks at all times outdoors (except for exercise), limited the number of people who can gather, and put strict capacity limits on restaurants and bars.

Despite all this, cases are still rising, and the local government on the Balearic Islands have officially declared they are suffering a second wave of coronavirus.

This has come with a stark warning: if cases aren’t brought back under control, even stricter measures could soon be imposed.

Which countries use the euro as their currency?