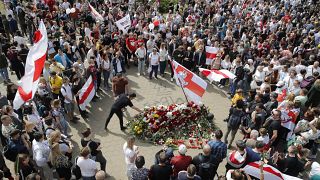 Thousands of Belarusians gathered on August 15 to pay tribute to the memory of a man who died during protests following last week's presidential election.

They came to the place where Alexander Taraikovsky died, Pushkinskaya Square, and laid flowers forming a 1.5-metre-high (5 ft) flower pile.

The 34-year-old died on August 10 as demonstrators took to the streets of the capital Minsk, denouncing official figures showing that authoritarian President Alexander Lukashenko, in power since 1994, had won a sixth term in office.

Police reported that an explosive device that Taraikovsky intended to throw at police blew up in his hand.

This version sparked outrage in Belarus as protesters' accounts and video shot on the spot didn't corroborate this.

Many believe he was shot by police.