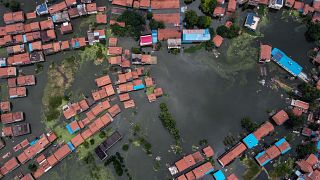 Vast swathes of China have been inundated by the worst flooding in decades along the Yangtze River, with residents piling into boats and makeshift rafts to escape a deluge that has collapsed flood defences and turned their homes into waterways.

Heavy rains since June have left at least 141 people dead and missing, forced nearly 15 million people to be evacuated from their homes in July alone, and caused billions of dollars in economic losses, according to the government.

Waters in more than 400 rivers have exceeded warning levels, while some have reached historic highs over a period that officials say has caused the highest average rainfall levels across the Yangtze basin since 1961.

Water levels there have hit historic highs, prompting an effort by more than 100,000 soldiers and other personnel to rescue residents and shore up dykes and levees to prevent worse flooding.

The government has so far said that the dam -- condemned by environmentalists for upsetting the river's ecology and for the forced relocation of millions of residents -- can handle the increased load.

Critics say the summer flooding threat has worsened over the decades due in part to rampant overdevelopment and poor water conservancies policies such as overbuilding of ill-advised dams and levees.

State media said Thursday that authorities also had issued a warning for the Huaihe River, another major Chinese waterway to the north of the Yangtze, as its waters continued to rise.