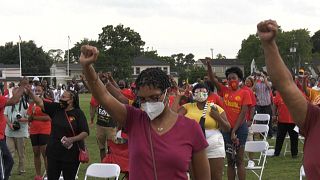 The viewing was held at Fountain of Praise Church in Houston, the city where Floyd was from originally.

The death of Floyd in police custody in Minneapolis on May 25 sparked protests throughout the United States and in many cities around the world.

Floyd died after a police officer kneeled on his neck for nearly nine minutes during an arrest. The police officer has been charged with second-degree murder.

"It’s time out for the oppression of black people. And today is the day," says Joseph Kualls, who went to the church to pay his respects to George Floyd.

Floyd’s funeral will be Tuesday, followed by a burial at the Houston Memorial Gardens cemetery in suburban Pearland, where he will be laid to rest next to his mother, Larcenia Floyd.