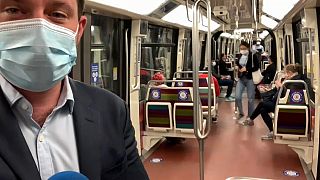 Huge contrast in mask use amongst Paris and London commuters

People in London and Paris are returning to work gradually - with a huge disparity in the use of protective masks between the two capitals.

Over the past 24 hours, commuters travelling on public transport in both locations has increased to a limited extent; London Underground tube network says that there’s been a 10% jump in passengers during peak hours.

Yet it’s far from similar to the pre-pandemic experience – there are now soap dispensers in all stations and local government body Transport For London is asking everyone to wear facemasks, even though that is not a legal requirement. It has estimated that less than 10% of London commuters are wearing them.

The relative lack of takeup of protective gear on the London transport system is far below the level in Paris, where wearing masks is mandatory and almost universal. A failure to comply with the requirement can lead to a €135 fine.

A letter of permission from the traveller’s employer explaining why they are on the transport system during rush hour is also required. It’s part of an attempt by the authorities to keep the numbers to 15% of normal capacity

In the French capital, numbers are still hugely down on most transport routes despite the new adjustments to the lockdown conditions, with carriages on the metro for example reportedly less than a quarter full in central areas.

The carriages also have stickers on the floor, urging people to maintain social distancing and show them far how apart they are required to stand.

However, there are continuing reports that networks serving outlying suburban areas are experiencing ongoing congestion in both the carriages and on platforms.