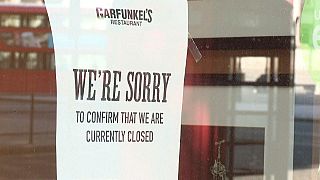 Differing approaches in UK and France despite COVID co-operation vow

The UK and France released a joint statement about the need for close co-operation over COVID-19 that was “necessary for their common border” on Sunday.

The statement said that, contrary to previous indications, the UK would not apply quarantine measures to travellers coming from France “at this stage” - and that “any measures on either side would be taken in a concerted and reciprocal manner”.

Yet their approaches in easing the lockdown from this week are very different.

France is easing its lockdown after eight weeks, but many emergency measures are still in place and masks are now compulsory on public transport. The country has been divided into red and green zones, with stricter measures still in place in the red areas.

Certificates allowing travel are no longer needed and journeys up to 100km are now permitted.

Although bars and restaurants will remain closed, shops other than just supermarkets can now re-open.

Nurseries and primary schools can also re-open, while in another week, schools for 11 to 15-year-olds can recommence within the green zones. Schools for older children are not expected to re-open until June.

The picture is more complex in the UK; following an announcement on Sunday by Prime Minister Boris Johnson, from this Wednesday, people in England who can't work from home will be encouraged to go to work – but should avoid public transport.

Unlimited outdoor exercise will be allowed in England, with sports such as golf and fishing permitted as long as they only involved members of the same household.

Johnson said nurseries and children up to the age of 11 could start to return to school from June 1 at the earliest, and some non-essential shops could reopen.

Disagreement between the UK’s central government and the regional governments elsewhere have been emphasised by the change; the devolved governments of Scotland, Wales and Northern Ireland have criticised the central government's moves. The advice in those other parts of the UK continues to be that people should remain confined.

Scottish First Minister Nicola Sturgeon, in particular, said that infection rates in her country remained too high to ease up on the confinement advice, even to a modest degree. She also said the Prime Minister should make it clear when he is talking about England alone, to avoid confusion.