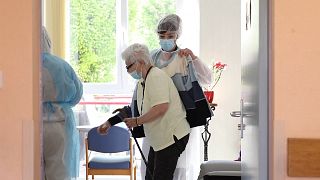 A region in eastern France which has been hit particularly hard by the coronavirus has carried out tests for all nursing home residents and staff.

The elderly residents have been confined to their rooms since mid-March to protect against infection, and officials in the Haut-Rhin region are hoping that mass testing will allow non-infected residents to spend time together as they did before the virus took hold.

Elderly people living at the Weiss nursing home in Ammerschwir, close to France's border with Germany, say they just want the freedom to chat face to face, play board games, or share a meal.

"We spend all our days between those four walls", said Henry Bohn, a 76-year-old who suffered a stroke that has left him in a wheelchair.

"We don't even have the right to go out in the hallway. They bring us breakfast, lunch and dinner here in the room."

The facility in Ammerschwir, founded by nuns as a hospital in the 17th century, poses particular problems for virus prevention, with small rooms and long corridors, and residents with often-severe cognitive difficulties.

"It is hard for them to remember the rules that we give them. When we put masks on them, they hardly keep them on, and they need to socialize and leave their rooms," said Sylvie Ghiringhelli, the head nurse.

Nursing homes in France have suffered disproportionately from the coronavirus pandemic. More than a third of the country's 17,000 coronavirus victims have died in care homes.

France has some 7,000 nursing homes, and the infection has swept through the sector, with more than 15,000 confirmed cases among residents and 8,900 among staff, according to records from March 1 to April 14.