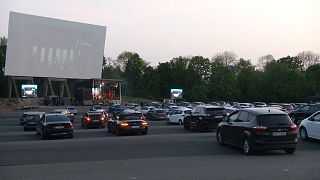 German music fans had a rare opportunity to attend a live performance on Friday evening while complying with the country's social distancing regulations.

Local band ''Brings'' in Cologne took to the stage at a drive-in cinema, open to 250 vehicles.

Each car was allowed to hold a maximum of two adults and a child.

Fans were asked to stay inside their cars for the entire concert and security staff were constantly checking to ensure there were no breaches of the rules.

As the band was playing live on stage, the performance was broadcast on a big screen and the sound was transmitted to the cars wirelessly.

The fans showed their appreciation after each song by honking their car horns.

The proceeds of the concert will go to employees of the Cologne University Hospital.

Germany has recorded more than 140,000 coronavirus cases and more than 4,300 fatalities.