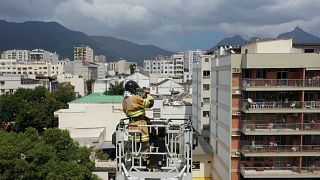 Decked out in full firefighting gear, Elielson Silva stands 45 metres above the ground atop a retractable ladder poking up from a red fire truck.

His lofty perch is about as high as Rio de Janeiro's Maracana soccer stadium behind him.

Silva faces a row of apartment buildings filled with Brazilians in isolation due to the new coronavirus.

He plays tunes known across Brazil, but especially ones composed in and about Rio.

Channeling an era that was more carefree, his songs tug at their heartstrings: "Watercolor of Brazil," "Samba of the Plane," "Marvelous City" and "I Know I'm Going to Love You."

That includes tourist hot spots that these days are eerily empty - like Copacabana beach and the base of Sugarloaf Mountain - and the working-class communities Rocinha and Jacarepagua.

On Sunday, he played in three separate neighborhoods, always sporting his heavy, fire-resistant jacket and fire helmet despite high temperatures.