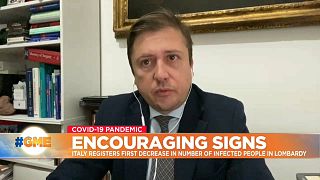 The number of new COVID-19 cases in Italy is 'stabilising' and should drop next week, the country’s deputy health minister told Euronews.

But the nation will need at least two more weeks of lockdown before it can turn the tide of the epidemic, said Pierpaolo Sileri, who himself contracted the new coronavirus last month and has since recovered.

“Our full lockdown started three weeks ago. Right now we are in the plateau of this pandemic here in Italy. So I believe over the next few days there will be a drop of this curve, and starting next week we will see a reduction in cases,” he said in an interview with Good Morning Europe.

Another 837 people died on Tuesday from COVID-19, according to Italian authorities, a slight increase from 812 on Monday. In total the country has confirmed more than 105,000 cases of the new coronavirus since the outbreak began, including those who died and those who recovered.

The respiratory disease caused by the virus has killed more than 12,400 people so far in Italy. No other country has reported such a high death toll.

“People who are dying today are people who became sick one or two weeks ago. So with the reduction of infections obviously we will observe a reduction of the deaths,” said Sileri.

“Things are getting slowly much much better. I believe Italy needs at least two more weeks of lockdown and then we will see,” he added.

Asked what Italian authorities were waiting to see before easing restrictions, Sileri cited a drop in how quickly the disease is transmitted from one person to another.

He cautioned that any easing of the nationwide lockdown would be progressive.

“In two weeks probably we’ll be able to restart slowly our activity. Slowly, because other outbreaks are possible,” he said, explaining that getting factories to reopen would be a priority, whereas reopening theatres and cinemas would come last.

Also important, Sileri said, will be to assess who already caught the virus and developed some immunity to it. Scientists around the world are currently working on developing serological tests that would detect – even if the virus is no longer present – whether a person developed the right antibodies to defeat the disease.

These serological tests work differently from existing nasal swabs, which only detect whether someone is currently infected with the virus and may pass it onto others – not whether a person has caught it in the past and may now be immune to it.

The nasal swabs are useful, however, to assess the scale of an outbreak – and the need to instate and maintain a lockdown.

The World Health Organization has urged countries to “test, test, test” people to curb the COVID-19 pandemic, which has now infected more than 800,000 people and killed 42,000 worldwide.

“I believe that a larger use of swabs is useful because this is a very deceitful disease,” said Sileri.

“You may start, as I started, with a loss of taste. I was unable to taste and smell things at the beginning, without fever or any other symptoms. So I believe you need to search for even very small symptoms and check.”