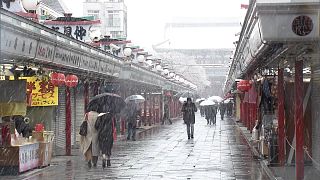 Japanese health authorities say more than 80 people have been confirmed to be infected with the coronavirus on Sunday so far, bringing Japan's total to over 1,800.

A low pressure system and a cold air mass brought unseasonal snow to Tokyo on Sunday.

The snow and the governor's request that people stay at home this weekend to prevent infections mean relatively few people are out on the streets.

The crowds are light at Shibuya's usually bustling scramble crossing.

Of the new cases found on Sunday, 68 were in the capital. This is the largest daily number of infections reported by local authorities.

Among the new cases were 58 at a facility for the disabled in Chiba Prefecture near Tokyo on Saturday. The governor of the prefecture describes the situation as grave.

The Kabukicho entertainment district in Tokyo is usually lively at night, but on Saturday it was nearly deserted after cinemas and karaoke parlors closed.

Some restaurants were open, but their managers say business has taken a major hit.