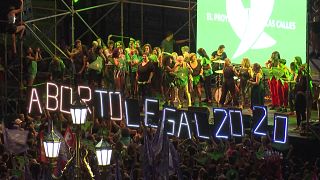 Thousands of women, including members of feminist groups from the United States and Chile, gathered on February 19 in front of the Argentine Congress to campaign for abortion to be made legal on demand.

Waving green handkerchiefs, the emblem of their movement, they held banners reading "Legal, safe and free abortion" and called for the measure to be included in the parliamentary agenda this year.

"We hope that Argentina passes this law, we hope that Congress heeds the call of Argentine women," said Johanna Cervone, of the Women's Equality Center in the United States.

The protesters included members of a Chilean feminist collective, which staged a choreography act in front of parliament.

Latin America has some of the strictest abortion laws in the world, said one of the protest leaders, Johanna Cervone of the Women's Equality Center.

In Argentina, it is legal to interrupt a pregnancy when the life or health of a woman is at risk or if the pregnancy was the result of rape.

In these cases, the Ministry of Health has a guide for medical staff in public and private institutions, but several provinces - whose populations have a strong conservative component - have refused to apply that protocol.

Congress debated a decriminalisation project for abortion in 2018, but the initiative - which was approved by the House of Representatives - failed to move forward in the Senate.

Liberals won ground in the Senate in November's elections, renewing activists' hopes that any new abortion bill would now be approved in the once staunchly conservative chamber.

Conservatives are expected to fight the issue tooth and nail however in a battle which is likely to mirror the bitter divisions of the last campaign.

The Catholic Church in Argentina has called an anti-abortion rally on March 8 to coincide with International Women's Day.

In Pope Francis's homeland, abortion is punishable by up to four years in prison and allowable only in cases of rape or if there is a risk to the life of the mother.