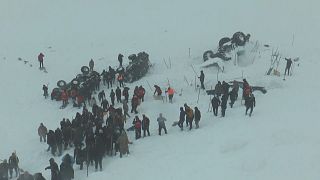 A second avalanche slammed into a mountain road in eastern Turkey on Wednesday, killing dozens and leaving many buried under the snow.

The emergency crew had been sent to the site to find two other people missing in a previous avalanche.

Some 300 emergency service workers were called to a highway near the mountain-surrounded town of Bahcesaray, in Van province, which borders Iran, after an avalanche struck late Tuesday, killing more than 20 people.