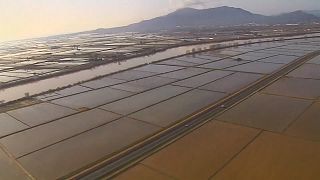 Zelenskyy in Brussels for Parliament speech and leaders' summit

The latest deaths were in the northern Catalonia region, where the emergency services found the body of a man inside a vehicle in Cabaces, 60 kilometres northwest of Tarragona.

They had earlier found another man's body in a flooded river near Jorba, 70 kilometres northwest of Barcelona.

And late on Wednesday, they found a man who died after falling into the water in Palamos, a port town about 100 kilometres up the coast from Barcelona. They are also searching for another man missing from a merchant ship in the same area.

Earlier on Thursday, regional officials confirmed the death of a 75-year-old woman whose house collapsed because of heavy rain in Alcoi, a town in the eastern Alicante region.