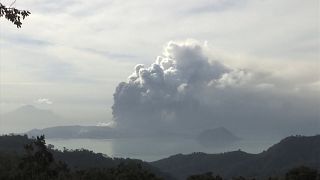 There were no immediate reports of casualties or major damage from Taal volcano’s eruption south of the capital that began Sunday.

But clouds of ash blew more than 100 kilometres (62 miles) north, reaching the bustling capital, Manila, and forcing the shutdown of the country's main airport with more than 240 international and domestic flights cancelled so far.

An alternative airport north of Manila at Clark Freeport remained open but authorities would shut it down too if ashfall threatens flights, the Civil Aviation Authority of the Philippines said.

The government’s disaster-response agency reported about 8,000 villagers have moved to at least 38 evacuation centres in the hard-hit province of Batangas and nearby Cavite province, but officials expect the number to swell with hundreds of thousands more being brought out of harm’s way.

Some residents could not move out of ash-blanketed villages due to a lack of transport and poor visibility.

Some refused to leave their homes and farms, officials said.