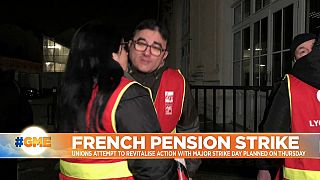 French unions are planning to reinvigorate industrial action against the president's planned pension reform, with the strike now into its 35th day.

Just over a third of drivers from the state-owned SNCF train company are still striking - compared to 85 percent over a month ago.

The strikers believe that the new points system and calculation method for their pensions would take their whole career into account, rather than just its final six months. They fear this would lower their pensions in many cases.

They’re not satisfied by what the government is calling the "pivotal age"; this is a formula which would allow people to retire at 62, but would encourage them to work for two more years to get a full pension.

The strikers are insisting on a complete withdrawal of the reform, but despite hints of a compromise, this is still far from the position of President Emmanuel Macron; he's still insisting the reform must be carried out.

The pivotal age formula has been rejected by all trade unions, however. It’s also disapproved of by a majority of the French public, according to opinion polls.

Some MPs from Macron's ruling Republique En Marche party have proposed an alternative. One of them, Hubert Julien-Laferrière, says the pivotal age formula can’t be applied to everyone:

The areas the government seems ready to enact a compromise on are the issues of elderly people’s employment and the difficult of some occupations. It’s expected to announce a draft plan on these issues within 15 days.

New negotiations have been arranged for Friday on the pension funding issue.

However, further demonstrations are currently arranged for the approaching weekend.