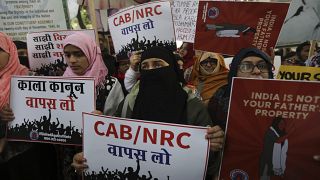 Hundreds of students and activists marched through New Delhi's streets calling for the revocation of India's controversial new citizenship law.

The protesters walked to the Jantar Mantar area near parliament carrying a large banner reading "We the people of India" and chanted slogans against Prime Minister Narendra Modi and the police force.

The demonstrators have claimed that the law is the latest effort by Modi’s government to marginalise India's 200 million Muslims.

Modi has defended the law, which allows Hindus, Christians and other religious minorities who are in India illegally to become citizens if they can show they were persecuted because of their religion Muslim-majority Bangladesh, Pakistan and Afghanistan.

However, the legislation does not apply to Muslims.

BJP yielded power to an alliance forged among the opposition Congress party and powerful regional groups in eastern Jharkhand state, where the voting took place this month.

Twenty-three people have been killed nationwide since the law was passed in Parliament earlier in December.

Since the legislation passed, authorities across India have taken a hard-line approach to quell the protests, banning public gatherings and blocking internet access at times in some states.