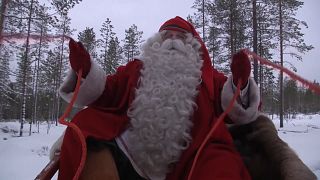 Santa Claus gets ready for his busiest time of year

For most people, the final few days before Christmas are when the out of office email gets switched on and the wind down into the festive period begins - but not at Santa Claus village in Finland.

The sun might not rise until around 11 am here in the Arctic Circle eight kilometres north of Rovaniemi, the capital of Lapland, but Santa and his elves are ramping up to their busiest night of the year.

That includes replying to mail in he village's post office, where Santa's elves are sorting through half a million letters and wish lists that they receive every Christmas.

This year, there were worries a postal strike in Finland may prevent some letters reaching Santa on time. But the post office says they are now arriving promptly.

"Merry Christmas," he cries, as he rides off on his sleigh.