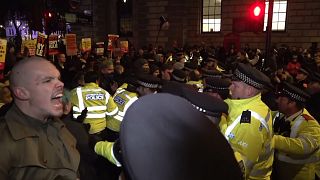 Protesters clash with police during demonstrations in central London

Protesters clashed with police on Friday during demonstrations in central London, after British conservative party won the general election with a majority.

An unknown number of people was arrested.

Earlier that day, Johnson pledged to heal Britain's divisions over Brexit. He obtained a majority in Parliament after calling a snap election that will allow him to "get Brexit done" by the end of January.