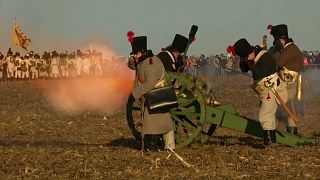 Hundreds took part in the re-enactment of the Battle of Austerlitz in Tvarozna, where French Emperor Napoleon Bonaparte won one of his most famous victories.

Also known as the Battle of the Three Emperors, the showdown was fought on December 2, 1805, and saw Napoleon's Grande Armee defeat a larger Russo-Austrian force through tactical brilliance.

"In many ways, it is celebrating Europe's history, but it is also celebrating world history so we can all learn from this and hopefully be better citizens in the future," Schneider said.

The annual Czech event saw enthusiasts in historical costume wielding muskets, pistols and sabres as they re-enacted the clash, which historians regard as one of the most important battles of the Napoleonic wars.