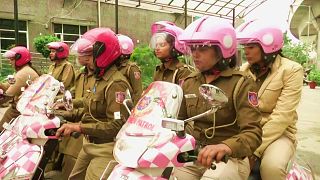 Female police officers in Delhi have been wearing pink to spread awareness for women's safety.

Home to some 26 million people, the Indian capital recorded the highest rate of crime against women in India, according to federal crime records data released in 2017.

Gender crime has become a political issue in Delhi since 2012 when the gang-rape of a 23-year-old woman brought thousands of people to Delhi's streets in protest.