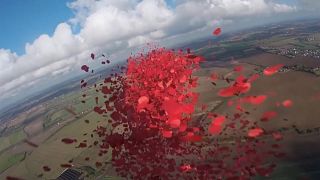 750,000 poppies dropped over the Battle of Britain memorial

An original Second World War C-47 aircraft, also known as Dakota, dropped 750,000 poppies over the Battle of Britain memorial in Kent on Sunday as part of Remembrance Day services.

In the UK, "remembrance poppies" traditionally commemorate the military personnel who died during the war.

Nationwide ceremonies take place every year on the nearest Sunday to the anniversary of the end of World War I at 11 a.m. on Nov. 11, 1918.

In London, thousands of military personnel, veterans and members of the public gathered in the streets around the Cenotaph to honour those killed in that war and subsequent conflicts.