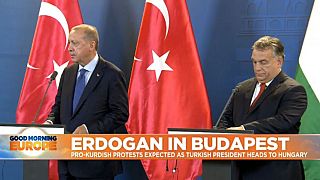 Turkey's Erdoğan booed by crowd in Budapest over Syria incursion

Turkish President Recep Tayyip Erdogan was met by angry protests during a visit to Budapest for talks with Hungarian leader Viktor Orbán.

While Orbán is a staunch supporter of Ankara, Erdogan's recent incursion into northern Syria ensured that his reception was far from positive on the streets of the Hungarian capital.

The close relationship goes back to 2013 when Orbán was looking for trade partners in the East. He and Erdogan found an immediate understanding.

The alliance has strengthened since the migration crisis and the deal Erdogan struck with the European Union to hold back refugees coming from Syria.

Orbán hailed the change of the (Turkish) constitution, attended Erdogan's inauguration as a president and slowed down the EU's condemnation of the Turkish offensive in Syria.

What Hungary gets in return is not quite evident. While trade between the 2 countries is growing, it is still far from the goal set in 2013.

Not all Hungarians are happy with Orbán's friendship with Erdogan: further demonstrations are planned in response to what the organisers call the invitation of a war criminal to Hungary.

During Erdogan's last visit, only the demonstration supporting the Turkish president were permitted by the Hungarian authorities