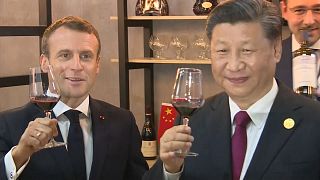 French President Emmanuel Macron arrived at the International Import Expo in Shanghai on Tuesday along with Chinese President Xi Jinping.

His visit to China was timed to ease some of the tensions that are stifling global commerce, with the European Union asking China to open its markets further and the US and China in a bitter fight over tariffs.

The two leaders tasted French food and wine specially prepared by a chef. It followed Macron's announcement on Monday that the EU and China had reached an agreement for the mutual protection of food and alcohol products.

Macron is due to travel to Beijing for a state visit on Wednesday.