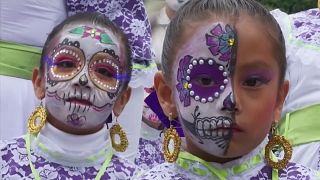 Mexicans dressed as elegant skeletons took to the streets of their capital on Saturday ahead of the country's Day of the Dead festivities.

Thousands gathered at the foot of Mexico City's Angel of Independence statue, wearing costumes and face paint to imitate the dapper Mexican skeletal figure known as "La Catrina" in a parade.

Some wore high-necked long dresses, while others channeled figures from Mexican folklore such as mariachi crooners in metal-studded black suits, Quinceañera princesses or scorned brides left at the altar.

Skeletal images have abounded in Mexico since pre-Hispanic times. But in 1910, when Mexico was ruled by dictator Porfirio Diaz, illustrator José Guadalupe Posada sketched the image of La Catrina as a tool for social satire.

The implication was that the extravagance of a few who were accumulating vast wealth in the era was killing others.

The dictator was deposed at the start of the Mexican revolution, while the skeletal dame became etched in popular culture.

Mexico's two-day holiday to honour the dead traditionally begins on November 1, All Saints' Day on the Catholic calendar.