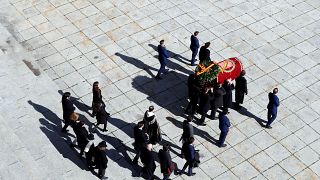 Cries of "long live Franco!" echoed around on Thursday (October 24) as Spain moved the remains of former dictator Francisco Franco out of the state mausoleum where he was buried in 1975.

His exhumation and reburial is the most significant move in years by Spanish authorities to tackle the ghost of the general, whose legacy still divides the country he dominated for nearly four decades.

The ruling Socialist Party, which faces a national election next month, has long sought to move Franco's remains from the huge monument, built on his orders and containing the remains of combatants from both sides of the 1936-39 civil war.

As crowds of media and onlookers gathered outside, Franco's coffin was extracted from its tomb in the Valley of the Fallen in a ceremony witnessed only by relatives and a small group of officials.

The coffin was carried to a waiting hearse and then transferred to a helicopter for the short fight to a private family vault in the Mingorrubio cemetery north of Madrid, where Franco will be reburied next to his wife.