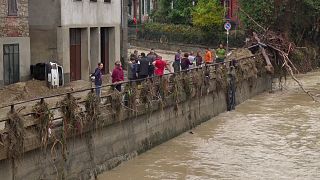 Severe weather and floods cause deaths across Western Europe

At least three people have died in torrential rain and flooding across parts of Western Europe.

In Spain's north-eastern region of Catalonia, one person died as the area was hit with their second period of torrential rain in the past two months. Authorities say 20,000 people have been affected by power cuts caused by the storms.

In southern France bad weather and flooding forced dozens to evacuate their homes.

The severe weather has also prompted the closure of a major train line between Montpellier in the south of France and Barcelona.