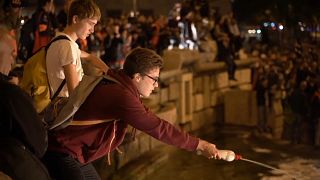 Demonstrators call on authorities to 'clean up the mess from Spain'

Catalan independence supporters staged a so-called ‘clean protest’ in Barcelona on Tuesday night, putting detergent in a city fountain as a message to ‘clean up the mess from Spain’.

Hundreds of protesters gathered at Plaza España in the latest demonstration against the jailing of a group of Catalan separatists last week. One of the protesters described the jailed separatists as political prisoners and said the demonstrations would continue until all of them were freed.

Euronews's Javier Villagarcia told Good Morning Europe that demonstrators have been creative in capturing people’s attention: “On Saturday there is another big demonstration in Barcelona, organised by the two main independence associations.” Villagarcia went on to to say: “These protests put Catalonia back on the map, the international press is talking about it, so this is kind of a positive reaction to the organisers of these protests.”

In the other hand it also it damages the image of Catalonia: “Barcelona is a city that hosts a number of trade fairs and international congresses and those pictures of fire in the centre of Barcelona damages its image.”