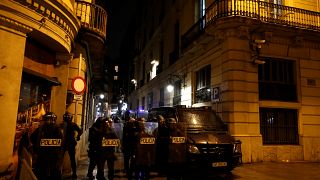 Spanish police clash with Catalan separatists as they try to disperse

Police clashed with protesters late on Monday night in downtown Barcelona after Spain's Supreme Court convicted 12 separatist leaders of illegally promoting the wealthy Catalonia region's independence and sentenced nine of them to prison.

Spain's Supreme Court on Monday (October 14) jailed nine Catalan separatist leaders for between nine and 13 years for their role in a failed independence bid, a decision that triggered mass protests in the region and left the future course of the dispute uncertain.

The strength of the protests could be the first indication of how the future looks for the independence struggle, which has so far been largely peaceful.

The ruling though doesn't answer the question of how to handle the separatism drive supported by nearly half of Catalonia's population.

An opinion poll in July showed 48.3% of Catalans against secession and 44% in favour.