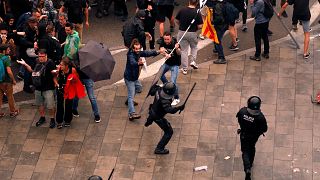 Protesters and police in fierce battles at Barcelona airport

Police clashed with Catalan independence supporters at Barcelona airport during protests on Monday after 12 separatist leaders were sentenced for their part in a failed secession bid in 2017.

Police in riot gear used batons to drive back the crowd near the airport terminal entrance.

Health authorities said 53 people were treated for injuries at the airport.