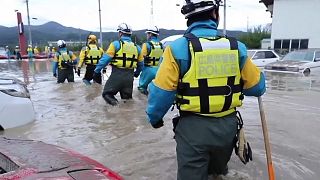 Tens of thousands of troops and rescue workers continued on Monday to save and search for those stranded by one of the worst typhoons to hit Japan in recent history.

At least 40 people were killed and some 189 were injured, public broadcaster NHK reported. Roughly 100,000 homes were left without power.

The Japanese city of Nagano was among one of the worst hit.

"There still are many residents who have yet to be accounted for. Our people in uniform are working day and night in search and rescue operations," Japanese Prime Minister Shinzo Abe told an emergency meeting of ministers, according to Reuters.