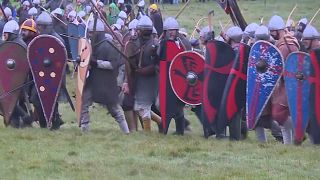 Nearly 1,000 years after the original battle took place, people dressed up as English and French troops "fought" each other on Saturday in a re-enactment of the Battle of Hastings.

Hundreds of participants in full costume clashed with swords, axes, as well as bows and arrows in East Sussex.

The famous battle of 1066, which pitted William of Normandy against the Anglo-Saxon King Harold, marked the beginning of the Norman conquest in England.

After his army's victory, William assumed the title of King of England on Christmas Day and ruled until his death in 1087.

Ken Kingrade, who played the role of King Harold II, said he took part in the re-enactment because he enjoyed the atmosphere.

Diana Evans, events manager for the organisers English Heritage, said "living history" tents had been set up at the event allowing spectators to see what life was like in 1066.