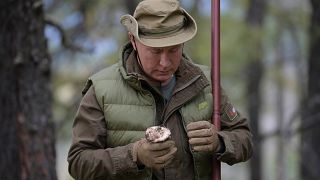 Russian President Vladimir Putin went for a walk in the Siberian taiga and climbed a mountain ahead of his birthday on Monday.

Putin, who was accompanied by Russian Defence Minister Sergey Shoigu, picked mushrooms and examined a pinecone in photos and video released by the Kremlin.

The video shows Shoigu digging out a small bush with wild berries.

The Russian president and defence minister talked about planting bushes in Moscow and striving for cleaner air.

Russia, one of the world's top polluters, recently joined the Paris agreement, roughly four years after it was first drafted.

The former KGB officer who has been in power for 20 years has previously been filmed on fishing trips, hang-gliding, and scuba diving.