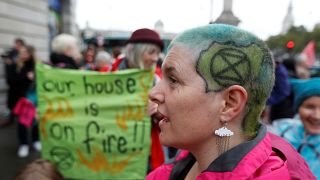 Climate change protesters have glued their hands to the ground in central London as protesters start two weeks of demonstrations calling on the UK government to take more drastic action to curb carbon emissions.

The London Metropolitan Police said at least 135 had been arrested as campaign group Extinction Rebellion began its "civil disobedience" by blocking roads, bridges and squares across the centre of the city.

Action by the group in April saw the city's main shopping district, Oxford Street, closed to cars as protesters blockaded it and several other major sites.