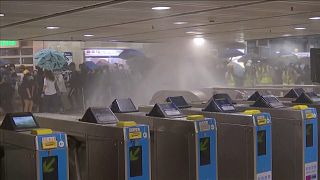 Protesters in Hong Kong on Friday (October 4) attacked the Sha Tin Metro station, after the government said it would invoke a British colonial-era law to allow authorities to impose regulations.

Crowds smashed ticket gates, sprinkler systems and spray-painted security cameras inside the station a day before the law was set to come into effect.

Hong Kong's embattled leader Carrie Lam on Friday invoked colonial-era emergency powers for the first time in more than 50 years in a dramatic move intended to quell escalating violence in the city.

Using this legislation, Lam said she would enact a new regulation banning face masks, which have been widely used by protesters to hide their identities.