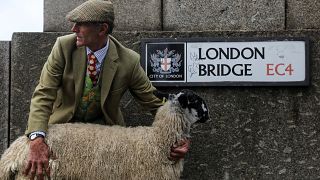 The rain just about managed to hold off for the annual London Sheep Drive, which sees flocks of sheep guided across London Bridge from north to south, in a tradition dating back more than 800 years.

Sir David Wootton is a lawyer, as well as an Alderman of the City of London, Underwarden of the Woolmen Company and was 684th Lord Mayor of London from 2011 to 2012.

He said the Sheep Drive tradition was as much about remembering the history of the creation of the City of London as it was about looking toward the future, adding that for the Liveries the best option for Brexit was to get a decision quickly and halt the uncertainty in business.

Freemen were historically allowed to bring livestock and tools into the city without paying tax in a tradition dating back to the 12th century.

Blustery conditions did not deter bemused Londoners from taking pictures of the 30-strong flock of North of England mule sheep on Sunday morning.

The City of London website said: “The medieval term 'freeman' meant someone who was not the property of a feudal lord but enjoyed privileges such as the right to earn money and own land.

The event, beloved by tourists, is organised by an association of wool producers, who donate the proceeds to charity.