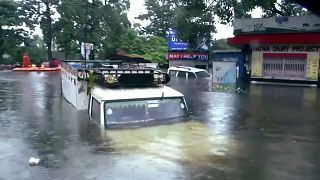 The state, India's largest, has witnessed constant rainfall in recent days and rivers have been flowing several notches above warning levels.

On Sunday (September 29) vehicles were abandoned and submerged in floodwater while people were being evacuated by the National Disaster Response Force in the neighbouring state of Bihar.

The state government has asked the Indian Air Force for helicopters and machines to pump out water.

India's monsoon usually starts retreating at the start of September but has been delayed by a month this year. Intense rainfall in many parts of the country has triggered floods that have swamped cane and rice fields.