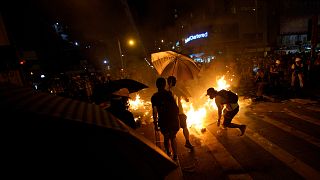 Hong Kong police used pepper spray to disperse protesters on Sunday (September 22) as the Chinese-ruled city once again plunged into chaos over the weekend.

Several other stations and shopping malls were damaged on Sunday.

Protest violence has often targeted the MTR, which is blamed for closing stations at the government's behest to stop demonstrators gathering.

The protesters are also demanding the company that runs the metro system hand over CCTV footage of police beating protesters on a train at Prince Edward station which went viral online.

The city has seen three months of occasionally violent protests, with demonstrators angry about what they see as creeping Chinese interference in Hong Kong, which returned to China in 1997 under a "one country, two systems" formula intended to guarantee freedoms that are not enjoyed on the mainland.

China says it is committed to the "one country, two systems" arrangement and denies meddling. It has accused foreign governments including the United States and Britain of inciting the unrest.