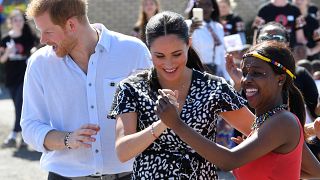 Britain's Prince Harry and his wife Meghan were seen dancing with a group of performers in Nyanga Township as they kicked off their Africa tour on Monday (September 23).

The royal couple joined in the dancing after their visit to a school in the township, where they met with local school children and were introduced to The Justice Desk, a group that teaches self-defence and empowerment to vulnerable children.

Meghan, a former US actress, has had only one official engagement since giving birth to Archie in May.

The Duke and Duchess of Sussex are expected to meet anti-apartheid cleric Archbishop Desmond Tutu and other dignitaries in South Africa, but chose to begin their tour in a township known as the country's "murder capital".

Harry, Queen Elizabeth's grandson and seventh in line to the throne, has been visiting southern Africa for two decades for holidays and conservation work.