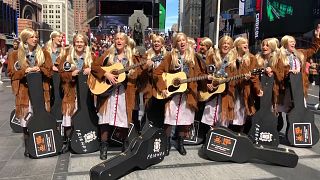 Dozens of Phoebe from Friends look-alikes perform in New York

They used the occasion to encourage Friends fans to adopt a cat.

The look-alikes took to the streets to perform the song "Smelly Cat", which was made famous by Phoebe, played by actress Lisa Kudrow.