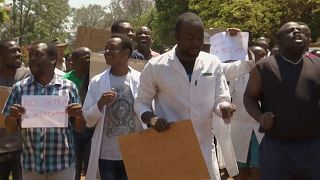 Dozens of doctors gathered outside Zimbabwe's biggest hospital on Sunday to demonstrate against the alleged abduction of their union boss.

Magombeyi had called for a pay strike.

The association represents hundreds of newly-qualified doctors who are doing their residencies. They earn less than $40 a month, want a review of their salaries and allowances.

His Vice President, Masimba Ndoro, said Magombeyi had alerted colleagues that three unidentified men were forcibly taking him away.

Several government critics have recently been abducted from their homes, tortured and warned by suspected state security agents to back off from anti-government actions.

Senior ZHDA member Tapiwa Mungofa leads protesters in chants, saying: "No Peter, no work, we will not go back to work."

Police spokesman Paul Nyathi says he has yet to receive details of the case.