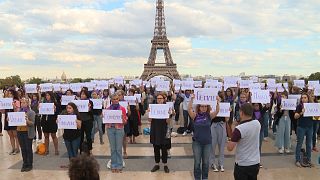 People held signs with the names of women killed on the basis of their gender during a demonstration to remember victims of femicides.

The demonstration was organised by the feminist organisation "Nous Toutes" in Paris on Sunday; the group was denouncing the 100th femicide of the year.

The organisation called for the French government to act; they're demanding the government give more money to tackle the issue.

In 2018, 121 women were killed by their partner or ex-partner, according to the Ministry of Interior.

The demonstration came ahead of a government meeting on domestic violence on September 3.