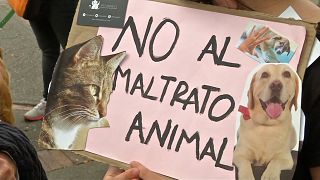 Animals lovers in Colombia take to the streets to combat abuse

People and their pets marched together in the streets of Bogota, Colombia on Sunday (September 01) to demand their government do more to protect animals from mistreatment and abuse.

Marchers walked alongside their furry friends while chanting "we are the voice of the animals," as others carried signs with images of victims of animal abuse.

An organiser of Sunday's march, Rosa Juliana Herrera, told Reuters the march is meant to demand politicians use their authority to implement policies to halt animal abuse.