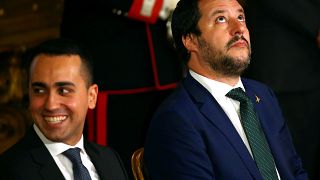 How far will parties compromise for a new Italian government?

As the deadline approaches for two of Italy's biggest parties to form a new coalition and avert fresh elections, compromises are being cut all across Italy's political spectrum.

Francesco Daveri, a professor at the Bocconi School of Management, spoke to Euronews about the potential pitfalls, and points of consensus in any future Italian government.

“Having a draft budgetary plan by mid-October is the deadline that Europe is posing to any country in Europe including Italy, so obviously everybody expects that Italy is going to send a draft budgetary plan by then. The important thing is that any new government should be cohesive enough internally in order to be able to deliver a budget which is considered to be sensible first of all by Italian households and companies… but also Europe and markets matter.”

“We don’t need any government, we need a government that is in a good condition to take coherent decisions that can be pursued over time,” he added.

Daveri added that whoever manages to form a government will face a major challenges in dealing with impending tax changes.

“Impending over every party and every government is an automatic increase of VAT taxation which is going to take place from January 1st 2020, because this has been legislated by the previous government," he said.

“The first task any new government should have is what to do with these so-called safeguard clauses of VAT increase which was there to provide a guarantee for European intuitions and markets that somehow Italy’s budget, and Italy’s public finances were now under control.”

“The second thing is in case we are going to have a new coalition between the democratic party and the five star movement, then we could expect that this coalition could find common ground by stressing environmental issues, social issues perhaps less in terms of tax cuts, in particular I would expect the flat tax will disappear from the political agenda.

Watch the full interview in the media player above