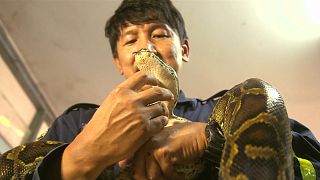 Many homes in the Thai capital are visited by snakes, which live in underground canals and enter gardens or toilets during the rainy season in search of food.

In 2018, disaster prevention officials said they received 37,000 reports of home intrusions by snakes around Bangkok.

Bangkok firefighters spend more time catching snakes than putting out fires, with more than 100 snake encroachments a day in recent months, compared to just one or two fires, data from the city's fire and rescue department shows.

A self-styled 'snake wrangler', Pukpinyo has caught about 10,000 snakes during the 16 years he has performed this dangerous task.

In his free time at the fire station, Pukpinyo cares for the captured snakes, taking king cobras out of their cages to feed them. He also runs classes on how to handle snakes safely.