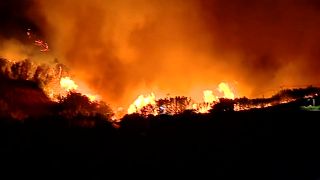 Residents were evacuated as a wildfire burns in Gran Canaria

Local residents were evacuated from their homes as a vast wildfire spread close to a National Park and to an area popular with holidaymakers on the Canary Island of Gran Canaria.

The regional government of the Canary Islands said 200 firefighters, Spain's military emergency and 10 water-dumping aircraft were working to combat the blaze.

Police said they believe the fire was started by someone using a soldering iron.

A 55-year-old man was arrested on Saturday.