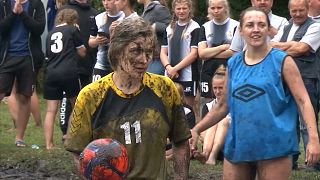 Dirty play is all OK in Belarusian swamp soccer contest

The pitch — the size of a futsal field — was covered in mud and water, which made even hitting the ball a tough job for twenty male and four female teams from all over the country,

"It's hard to play in the mud. The legs get stuck, it's hard even to get up, and you must hit the ball as well, it's really hard!" said Yulia, one of the competitors and a school gym teacher from the Belarusian town of Smorgon.

The amateur players seemed to enjoy falling and rolling in the mud as much as playing the ball, as for many players taking part in the game was about the adrenaline and healthy lifestyle.

"We are simple guys who love soccer, almost all of us on the team are from one village," Igor, from the village of Selyavichi, told Reuters after the game. "We came here first of all because we love soccer. We never had any big success in the game, even on the regional level. But we believe in soccer, we love soccer and believe that the swamp soccer is exactly right for us."