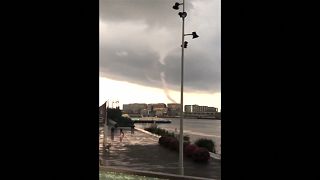 Thunderstorms over the city caused the powerful weather phenomenon, the Royal Netherlands Meteorological Institute (KNMI) said on its Twitter page.

A tornado also ripped through the southern Luxembourg town of Petange on Friday and tore apart a building's roof, footage uploaded to social media showed.